An unforgettable tour with one of the ATV founding fathers

This adventure has been around 10 years in the making constricted by an unfortunate timing of events. Jump back to 2006: The Mudd-Ox project is well under way; body molds no longer piles of wood but a hand constructed shape of perfection. While visiting the workshop to see the latest development, the craftsman casually remarked his past experience making amphibious ATV bodies in the past- for Starcraft. It was almost unbelievable. Starcraft… the machine Matt purchased at the age of 16. The same machine featured in all our home videos from mud racing to donuts in the front yard at Christmastime. The same one that has passed the test of time being resurrected as a Star Trek spaceship to a winning vintage racer. Matt was given the contact information for Lester Miller, one of the founders of the ATV department at Starcraft. To top it off, the engineer lived locally.

Contact had been attempted to take a look at Lester’s Starcraft memorabilia but timing was not on their side. Shortly after the first phone call was made, a large purple truck pulled into the driveway asking 9 year old me where my dad (Matt) was. Unfortunately, he was not home. I remember walking to Death Row where all the forgotten projects were laid to rest and pointed at the faded yellow corpse. Lester took a look at it and headed off in hopes to have a true gathering in the near future.

The storage barn for Lester’s collection of vintage machinery

Starting in 2012 we began spending our Thursdays driving our classic cars to the local cruise-in. We casually stroll through the cars but usually are on a dedicated trip to the dining area. As we glanced back and forth at the sea of candy paint and shining chrome, I spotted a purple giant.

I saw that truck before.

In curious fashion, dad and now 15 year old I walked up to the owner. Once everyone put the pieces together, our faces lit up with the newfound connection. After discussing the beaten dead horse Starcraft dad owned and all of its changed forms, Lester was amazed vintage 6×6 ATV racing was under way once again. He recalled stories of the Starcraft racing team and all their mischiefs, such as swapping a 300cc to 400cc engine before a race (and won). Dad began to story tell of days gone by, and Lester recognized the hand motions of the roll cage dad explained it wore back in 1990. Dad’s was a factory racer.

Experience of a Lifetime

November 15, 2015 we arrived to Miller Farms. It had been almost 10 years since contact was made, and 3 years after the first cruise-in. Lester was out front to greet dad and now 18 year old I as we pulled into the driveway with another Starcraft in tow, just acquired half an hour prior. The 6×6 inventor led us through his barn where a restored example was stored and proceeded to talk about the windshield on the shining machine. It was worn on the front of Starcraft #3 since 1971 until the recent addition of #29 to Lester’s fleet. Less than 50 were produced.

Lester brought us to his workshop after admiration of his beautiful ATV. On the top of a rusty toolbox rested a blue folder. We were blessed with the opportunity to not only view the contents inside- but to bring it home and make copies. Pandora’s folder included priceless vintage NATVA (National All-Terrain Vehicle Association) documents, the original Starcraft owner’s manual, and unheard of Starcraft soft top installation instructions. But wait… there’s more! A mere 10 ft behind us lied the top itself. Dad and I could have spent hours carefully reading every word on those aged pieces of paper. Another piece we didn’t get to see was a Starcraft model toy as it was currently sent out for reproduction. Lester was eager to take us for a ride and bring us to the real treasure.

A quick click of the key and the JLO 295 2-stroke rumbled right up. Before we could even process what was happening, Lester- the man behind the engineering- was driving us through the farmland in his Starcraft. The very model dad spent his younger years causing mischief in. The coveted machine built under the Starcraft camper corporation. And there we rode: two 6×6 nuts riding passenger of a wound-out Starcraft with Lester Miller at the controls. This had to be a dream.

We bounced and hopped through the gravel road splitting the vast fields past sight of the barn, past sight of civilization. The 6×6 skidded to the left onto a path unknown to the rest of mankind. Little did we know this road held a machine of historical significance: Starcraft #3, the first one to leave the factory. It was used by the Miller family on their lake property alongside a Scrambler 6×6. This machine was originally equipped with the factory top and windshield, which Lester explained was difficult to get in and out of. He mounted the windshield on his restored machine. The early ATV is retired to the weeds for the time being, however it is in great condition. All the fiberglass appeared to be solid and the vehicle is complete. Lester is holding onto his engineering feat as a reminder of memories taking his kids weekend rides.

After looking over the time machine, we received the grand tour of all the farm buildings on the property. We ended up back to the front building where the Starcraft was unearthed earlier in the day, and peered around the Studebakers in Lester’s collection. One example, a 1957 Golden Hawk, was the first produced car with a supercharger. Not surprisingly we heard a story of Lester passing another Studebaker at 115 mph.

All three of us stood out front of the building to hear one last story: The Starcraft racing team was planning on leaving for an event the next morning. Lester went home for the night and when he came back, the team was still at the shop finishing up their machines (we aren’t the only ones who do this!). Of course the guys tested the racers at night without headlights… and ended up driving the opposite direction of each other around the test track. Both machines collided and destroyed one upper body. Most of the night was spent replacing it before Lester got back.

Peering inside to find the serial number of the early machine

It was the end of our adventure. Spending the day with the Starcraft inventor himself was nearly unbelievable, the entire experience felt… surreal. Without taking trips and documenting their stories, all the historical information and knowledge would be lost. Lester was down to earth and a great source for keeping the history of vintage ATV’s alive. His smile was still ear to ear when he hopped in his personal Starcraft and started the engine. We are so thankful to have the opportunity to spend time with one of the founding fathers of amphibious ATV’s. 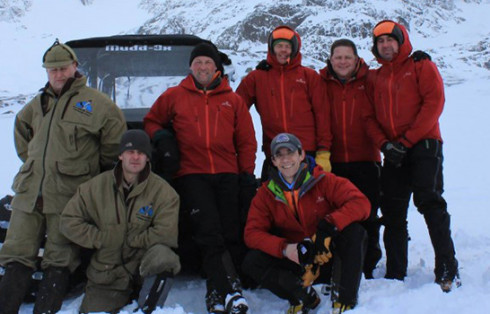