Beginning in 1959, John Gower prototyped a vehicle unlike any the world has never seen. It was 6-wheel drive, fully amphibious, and could transport individuals across all terrains, all seasons. This revolutionary product was named “Jiger” with early production models built to order in 1960. As the Jiger was one of the first of its kind, small engine technology simply wasn’t developed. To combat this, Gower utilized twin chainsaw-style engines. Each engine powered its respected side of the drivetrain.

One of its most notable features quickly became known as a “balloon tire” which could be operated at extremely low air pressure. This provided comfort for occupants, and a wide footprint to protect the environment from deep ruts. Early Jigers featured treads ran diagonally across the entire tire, while later years adopted the tractor-style tread. It’s believed that very few twin engine Jigers were ever produced, perhaps less than two dozen. At this time we only know of a single survivor.

Mass production began in late 1965 with the refined and most popular model: the 152. It featured a single engine with drivetrain improvements, and even a standardized headlight molded into the body. The 152 was preferred over the twin engine setup in terms of reliability and ease of use.

Unfortunately, Gower’s business skills were not as astonishing as his innovation skills. In February of 1968, Jiger Corp. fell into bankruptcy and was purchased by Cape Breton Development Corp. Once again, the Jiger’s drivetrain was completely revamped, this time with a hydraulic setup. It was deemed the Twin-Six, however it did not feature twin engines.

On January 15, 1971 the Jiger assets of Cape Breton Development Corp. were sold at public auction. This would become the end of the world’s first produced ATV. Although not an ideal finale, Jiger did have an astonishing decade long run – which is four to five times longer than most from the era.

Jiger created arguably one of the coolest 1960’s promotional videos. Suspend the ATV in the air and drop it over concrete? Done. Build a ramp and launch the Jiger into a pond? Constructed.

Wayne Edel is a family member of the late John Gower, and has created a fantastic Jiger website here. There is extensive information about the company’s history and historic photos. The video below is a test drive of his personal Jiger. 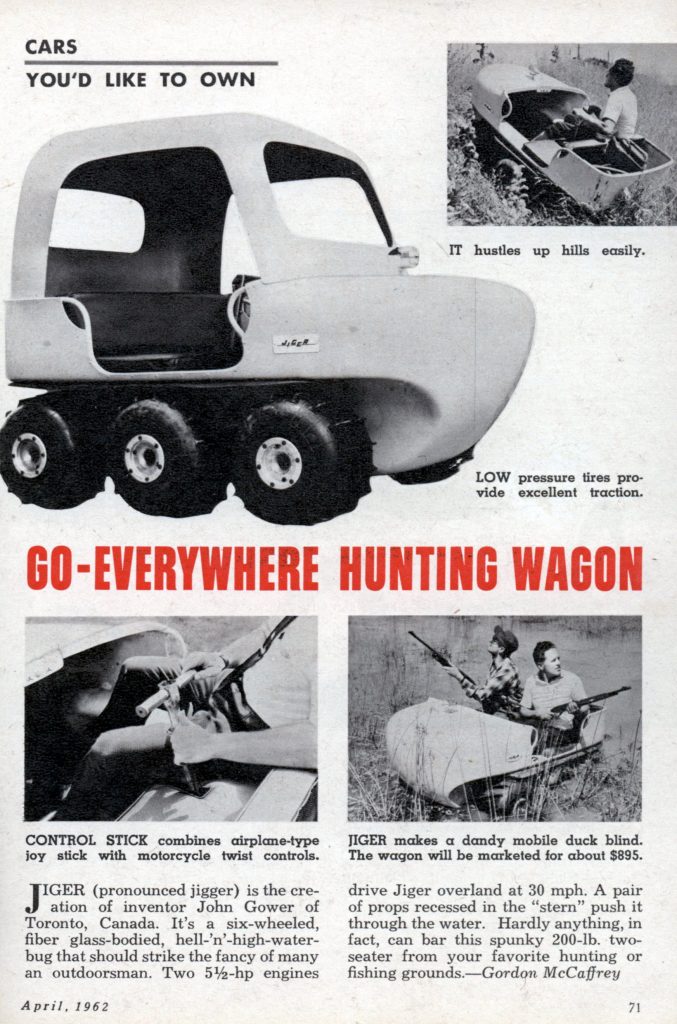 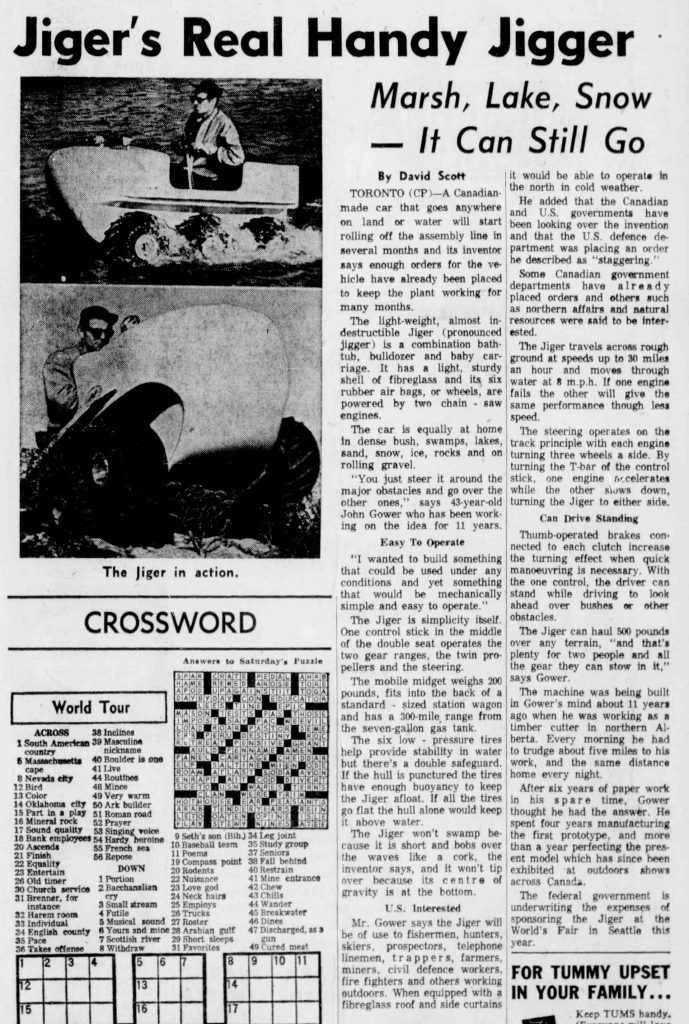 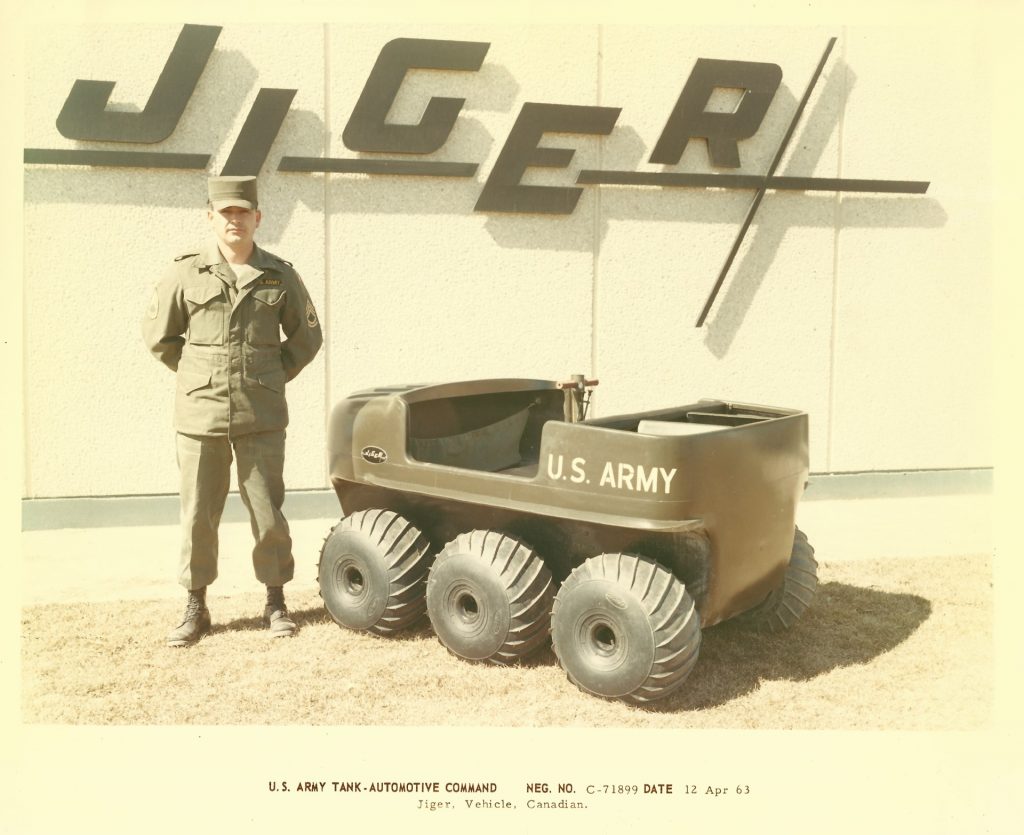 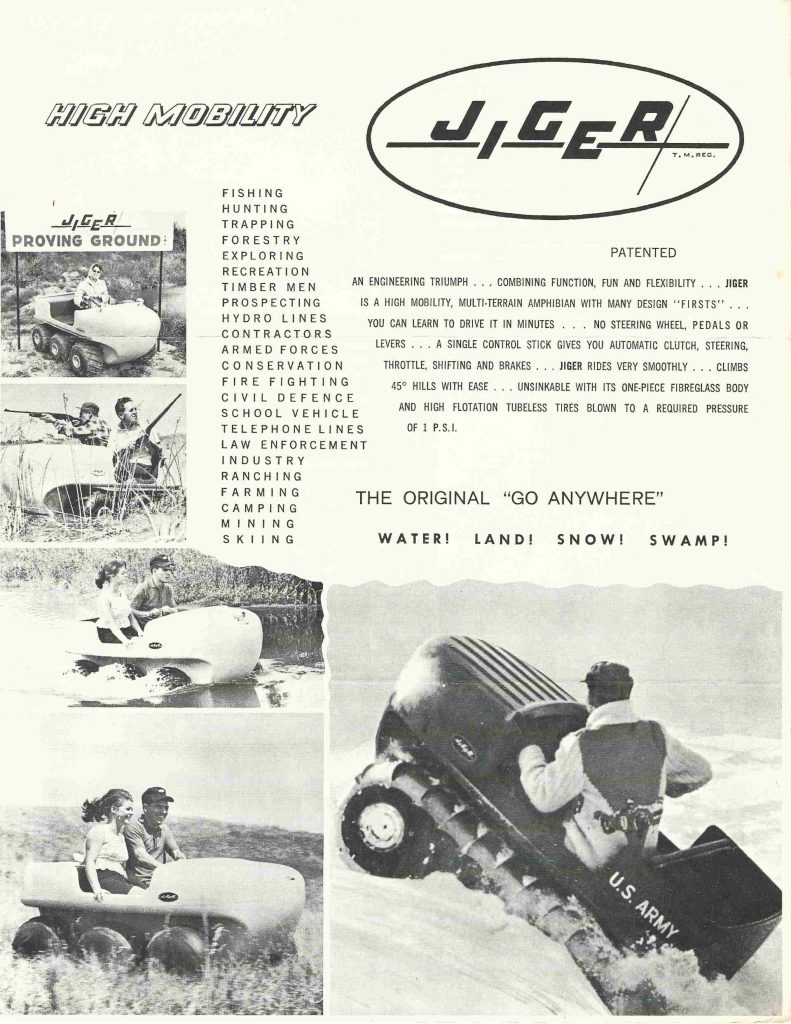 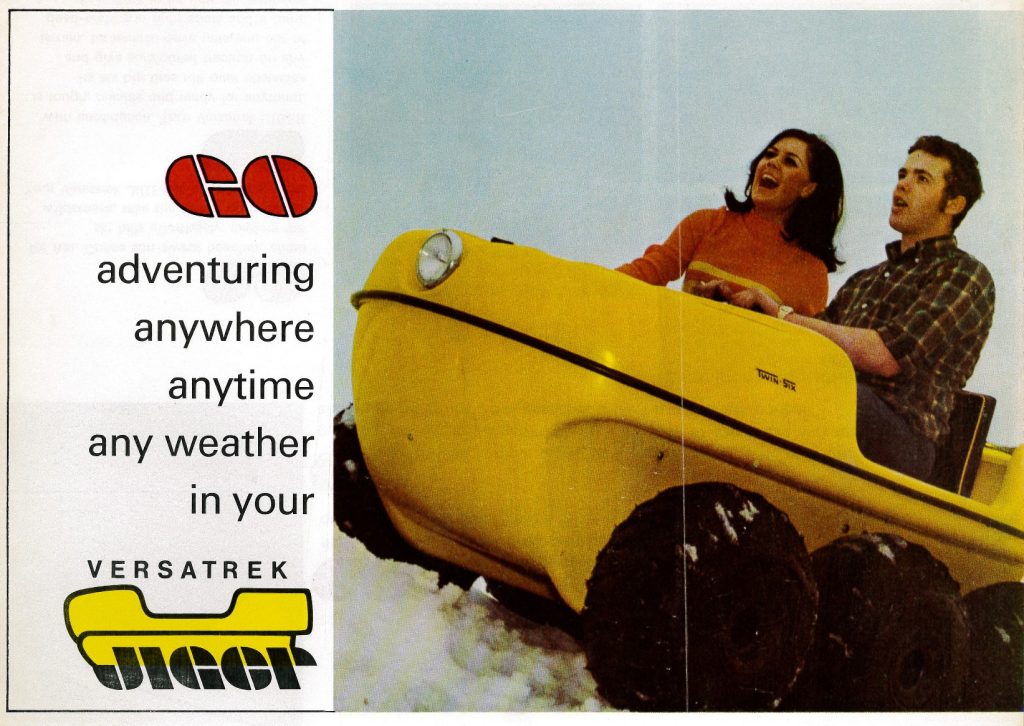 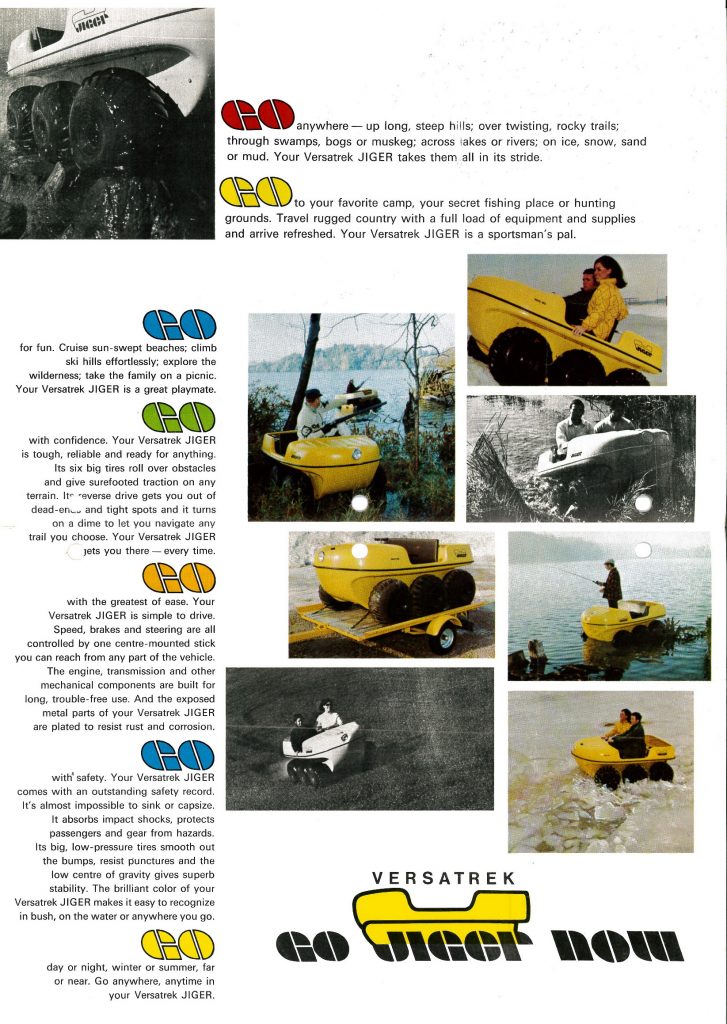 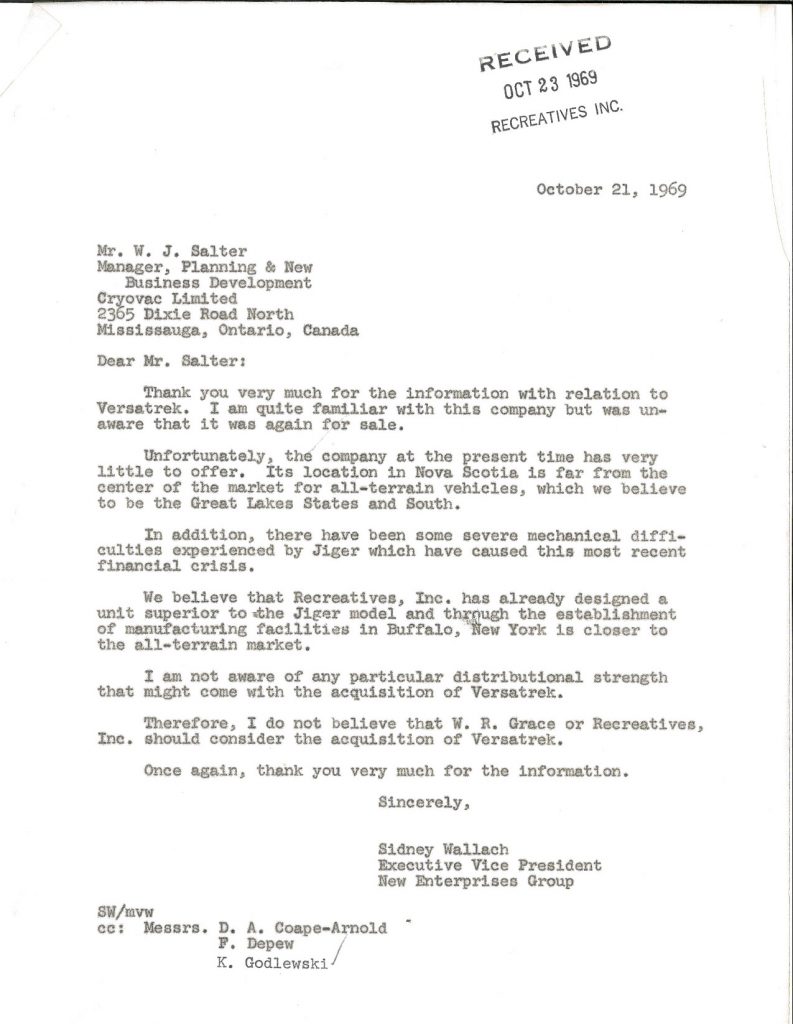 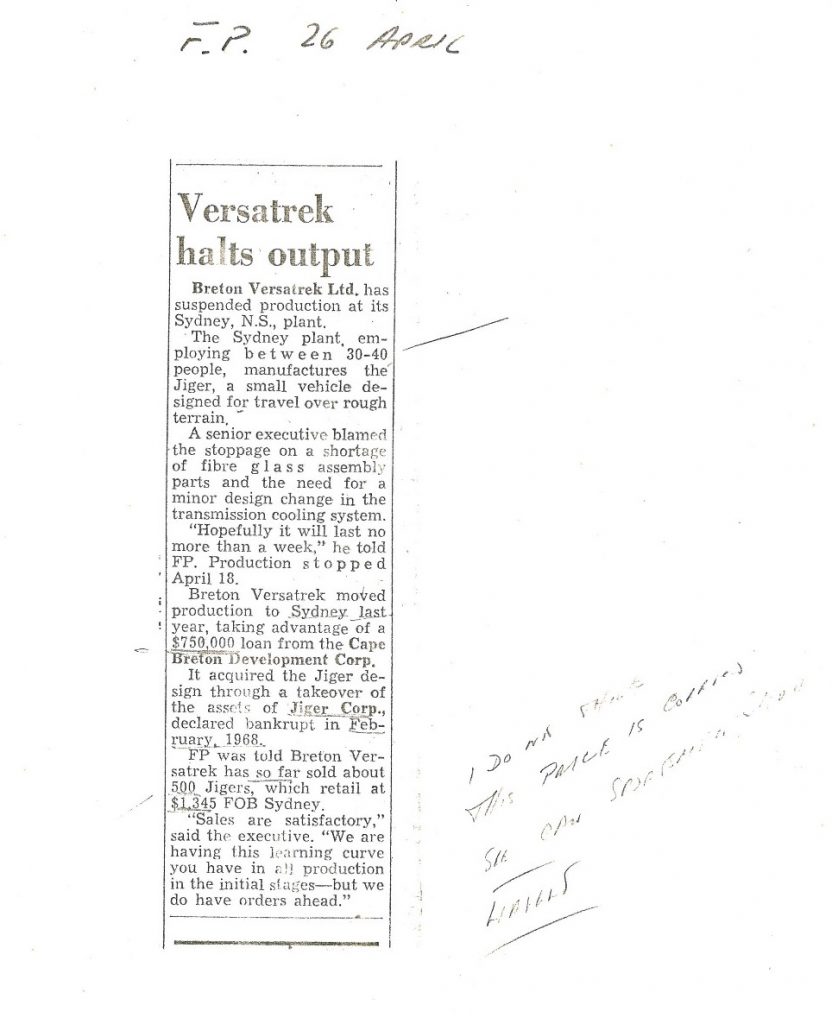 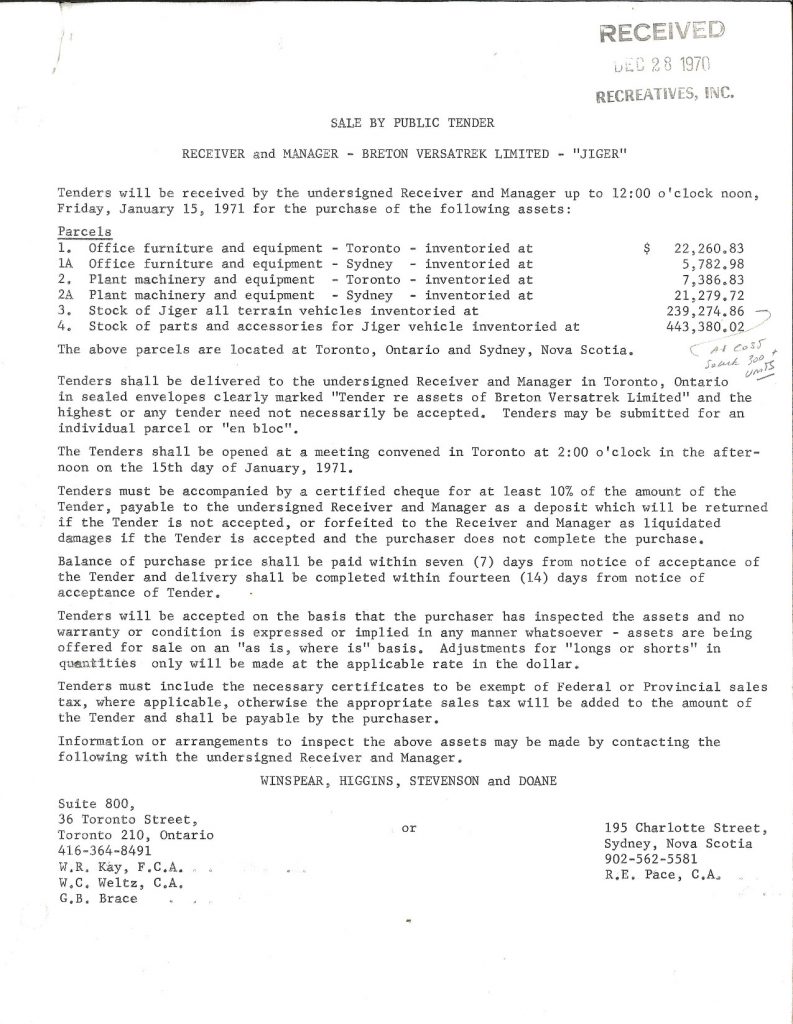 Phil Lawrence of Michigan sent us these excellent photos of his father’s 1965 model 152. When Phil left the Air Force, he decided to make a top for the Jiger. The goal was to market these to Jiger dealers, but unfortunately the company went out of business before it was finished. Phil’s father is pictured driving the Jiger on ice.