In December 2019, we had the opportunity to visit Bud Fischer in Ashtabula, Ohio. The Fischer family is the truly root of all ATV racing. Beginning in the late 1960’s, William Edward Fischer Sr. who owned and operated Fischer Construction Company invested money into the small startup of a new 6×6. It would be called the Scrambler.

As the Scrambler proved to be a fast, nimble and high speed ATV, Fischer decided to utilize his construction equipment and build a racetrack for his beloved Scrambler investment. A place for others to compete, his children to have fun, and most of all a place of entertainment for the town of Ashtabula. In 1969, Pine Lake opened its doors and became the world’s first ATV racetrack.

By this time the ATV industry exploded into mainstream media. With over 70 manufacturers of the new all-terrain vehicles, it quickly became popular to host racing events at small tracks and local fairgrounds. It was entertaining for the crowd, fun for drivers, and a marketing tool for manufacturers. This sparked the creation of NATVA (National All-Terrain Vehicle Association) and other racetracks across the US.

In March of 1970, the first national ATV rally was held at Mount Snow in Vermont. This two day event featured autocross/gymkhana, manufacturer displays, and and of course a 25 mile endurance race in which the winner received a kiss from Ms. Vermont. It drew nearly 100 ATV’s from across North America.

In 1970 handheld cameras were clunkly, low quality and often in black and white. Most individuals did not capture these historic events on film. Fortunately, the Fischer family did. Their video collection has remained safe for the last 5 decades and is in the process of full digitization. We owe a huge thanks to them for providing us with their home video and an official NATVA broadcast of the event.

A full broadcast with commentary is simply unheard of when discussing early ATV history. Some manufacturers didn’t even have sound in their promotional videos.

In the beginning of the broadcast, NATVA representatives explain the importance of safety measures. Ironically, a driver gets catapulted out of his Attex just seconds after the race begins. This was a time before the rule book of ATV racing existed. In following years, it was mandated drivers would have a racing seat, harness, and roll cage.

Perhaps some of the greatest parts of these videos is not the race itself, but the pit lanes. Rows of Attex, Amphicat, Max, Scrambler, Skipper and Terra Tiger models sit proudly on display along with factory banners. A scene that will never be recreated.

Scrambler and Terra Tiger created commercials for the broadcast. Scrambler’s film was heavily influenced by their racing and sporty nature, while Terra Tiger focused more on utility uses.

A second event at Mt Snow that historic weekend was gymkhana, also known as autocross. Drivers competed in a time trial through a small course made of cones. It’s a race of pure driver skill.

Some endurance drivers experienced difficulties, such as the Amphicat with a snapped off axle, or the Coot driver desperately trying to push his racer out of the deep snow.

Winning a 25 mile endurance race isn’t easy. The Attex driver who did was rewarded with a kiss from Ms. Vermont, but most importantly added to his national points standing.

The rally was featured in Popular Mechanics January 1971. If you attended the Mt Snow rally, or any NATVA rallies, please contact us here.

Where to Find Mudd-Ox Pricing 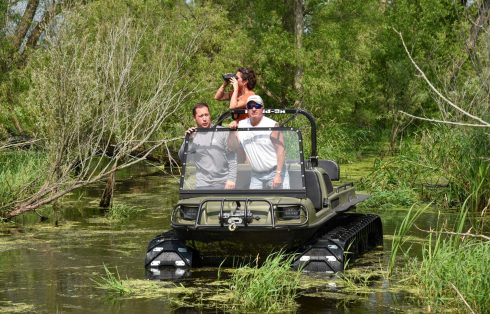 Where to Find Mudd-Ox Pricing