History of the ATV

Beginning in 1959, John Gower prototypes a vehicle unlike any the world has never seen. It would be 6-wheel drive, fully amphibious, and could transport individuals across all terrains, all seasons. This revolutionary product was named “Jiger” with early production models built to order in 1960. Mass production begins in late 1965 with the 152 model. One of its most notable features quickly becomes known as a “balloon tire” which can be operated at extremely low air pressure. This provides comfort for occupants, and a wide footprint to protect the environment from deep ruts.

At this time, the world begins to take notice. Innovators from all walks of life began to create their own amphibious ATV companies. Everywhere one looks from Popular Mechanics to the Banana Splits, the 6×6 is proudly displaced. These become so popular that Fischer Construction Co. whom helped fund the Scrambler 6×6, opens the doors to Pine Lake Raceway: America’s first ATV racetrack. A simple dirt track in the middle of a field that will spawn a national racing circuit operated through NATVA (National All-Terrain Vehicle Association). 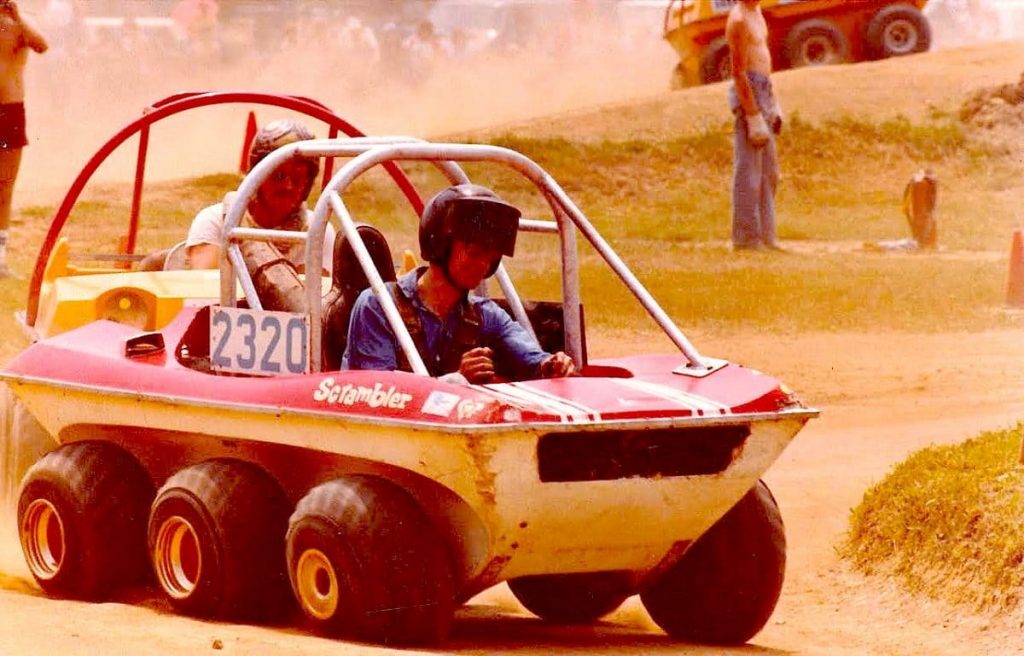 Although Jiger has already closed its doors due to mismanagement, the ATV scene is at an all time high. They’re transporting hunters to their deer stand, they’re the center of a child’s summer vacation, and they’re the weekend entertainment for small town racing. Most prominent manufactures are: Amphicat, Attex, Argo, Hustler, Max, Scrambler, and Terra Tiger. Many of these companies do not restrict themselves to only producing 6×6’s, but also dip into the 3-wheeler dune cycle, mini bike and camper market. Large companies such as Allis Chalmers, Sears and Starcraft take advantage of their large dealer networks to sell this product line. 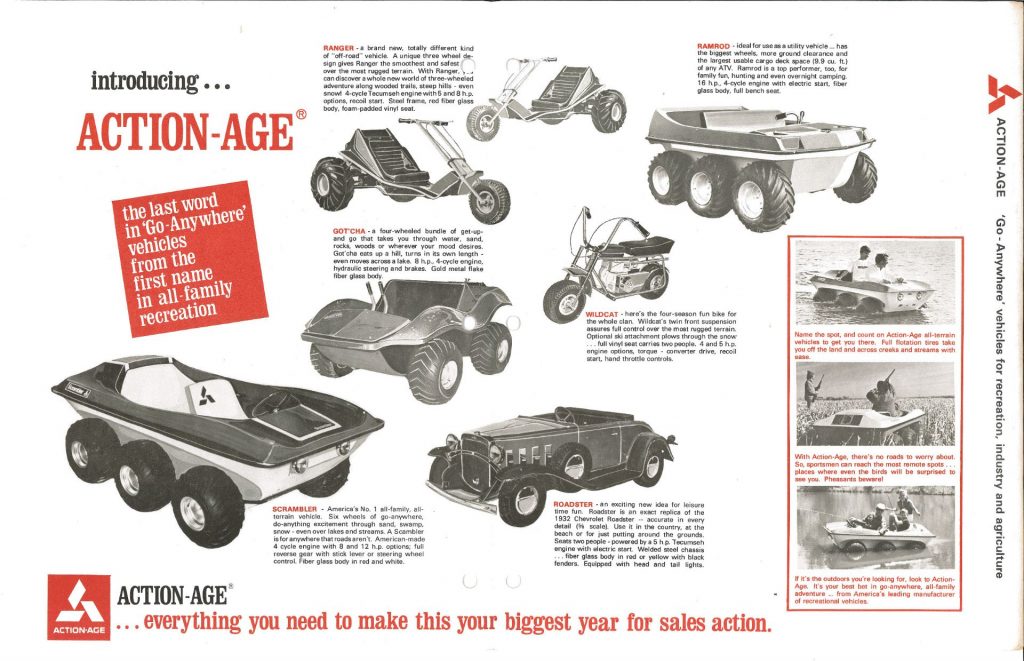 The tide slowly begins to turn. Consumers are quickly becoming tired of the design flaws of early 6×6’s. Many of them utilize high maintenance 2-stroke engines, undersized drivetrain components such as bicycle chains, and weak bodies made of ABS plastic. Honda realizes their is a potential to gain traction in the US market. Honda America sends a set of tires from the Amphicat to Japan, and they’re fitted on what becomes known as the ATC90. 4-stroke, well built, and most importantly it’s price. A brand new Honda costs just $595 while the base model Attex was $995 with prices exceeding $1695. As time continues on to 1973, the oil crisis brings down the American economy. Combining these factors, many 6×6 manufacturers begin to dwindle away. 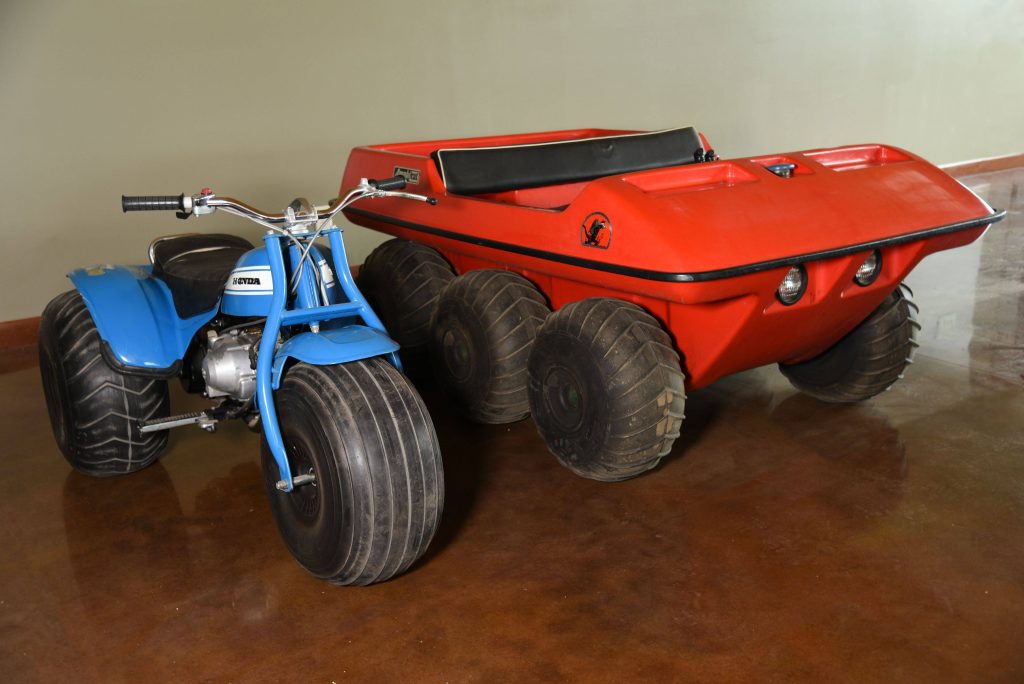 Companies that rise against the odds are forced to continue innovating. Attex and Argo quickly become leaders in testing new technologies. Attex redesigns their chassis, body materials, new drivelines and even building a 16-wheeled swamp buggy known as the Bigfoot. Argo continues to build their own transmissions, and frequently develops new 6×6 and 8×8 models. Even though 3 and 4-wheelers begin to take over the civilian market, there is still a strong need for amphibious vehicles for recreational, but predominately commercial and military markets. These unique machines travel where others simply cannot go. 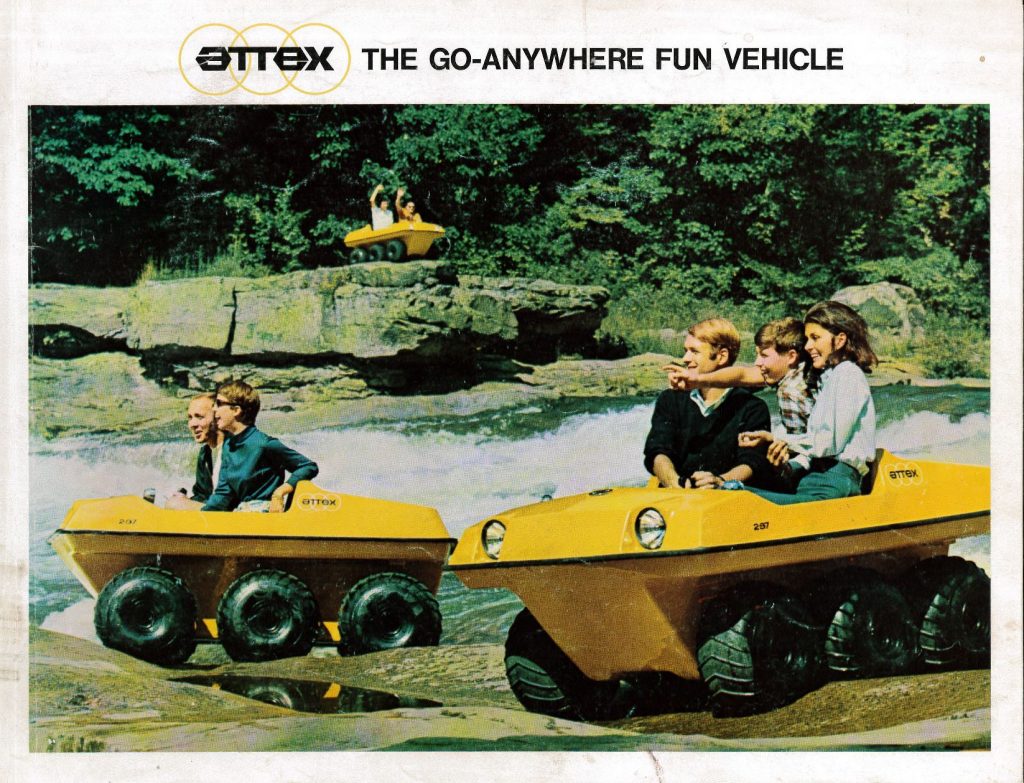 In December of 1975, the 6×6 ATV world as we know it disappears overnight. Recreatives Industries who produce the Max, alongside Hustler Corporation, agree to purchase the rights to the BorgWarner T-20 transmission. The very same transmission that Attex and countless other companies use in their production models. To provide adequate time for model changes, the purchase agreement states that RI and Hustler are to provide transmissions to other manufacturers for one year. However, it does not state the lead time. RI and Hustler make it one year and one day. 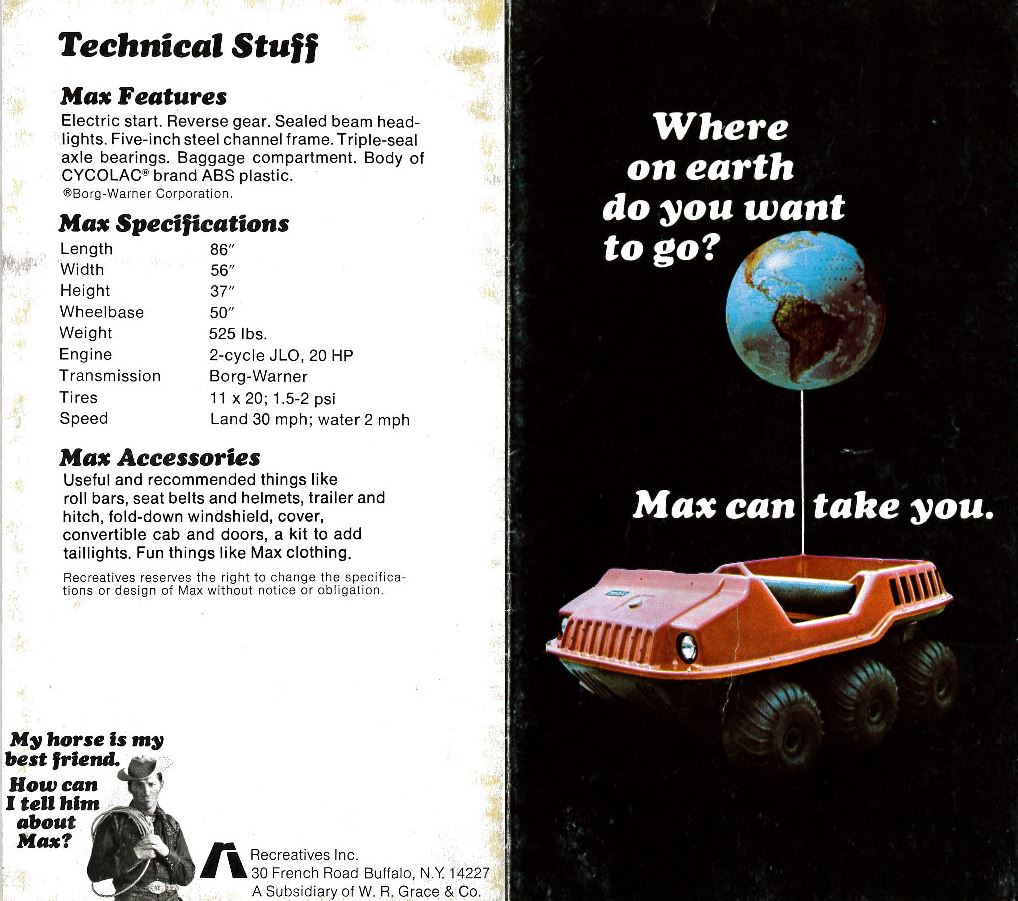 This devastating blow knocks out a majority of the remaining amphibious ATV companies. Attex quickly adapts a new style transmission, but it’s ultimately a failure, and their doors close as well. Argo, RI and Hustler are now the last major competitors standing with a few smaller companies remaining. On a random day in the 1980’s, the owner of Hustler walks into the plant and tells everyone to go come. 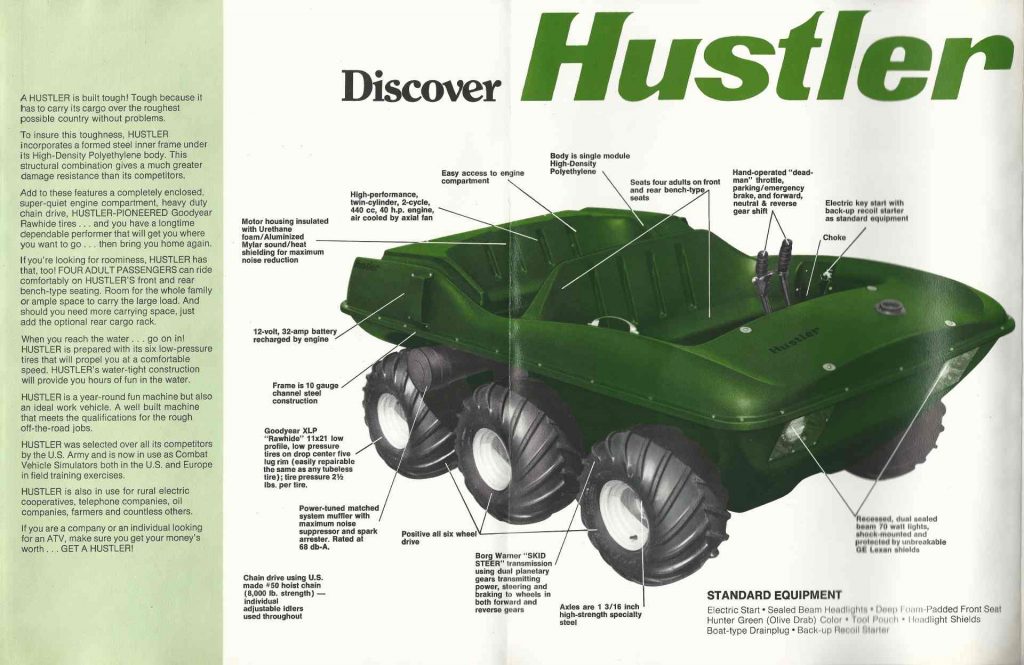 As time continues on, new companies build specialized vehicles, most often for commercial and military markets, such as Hydratrek. Growing up with amphibious ATV’s, we experienced the design flaws which plagued the industry decades prior, and began developing a solution using modern technology. A hobby that got slightly out of control is known as Mudd-Ox. 48 years after the Jiger, our first production machine was sold in 2008. It’s been a wild ride ever since, and we wouldn’t want it any other way. 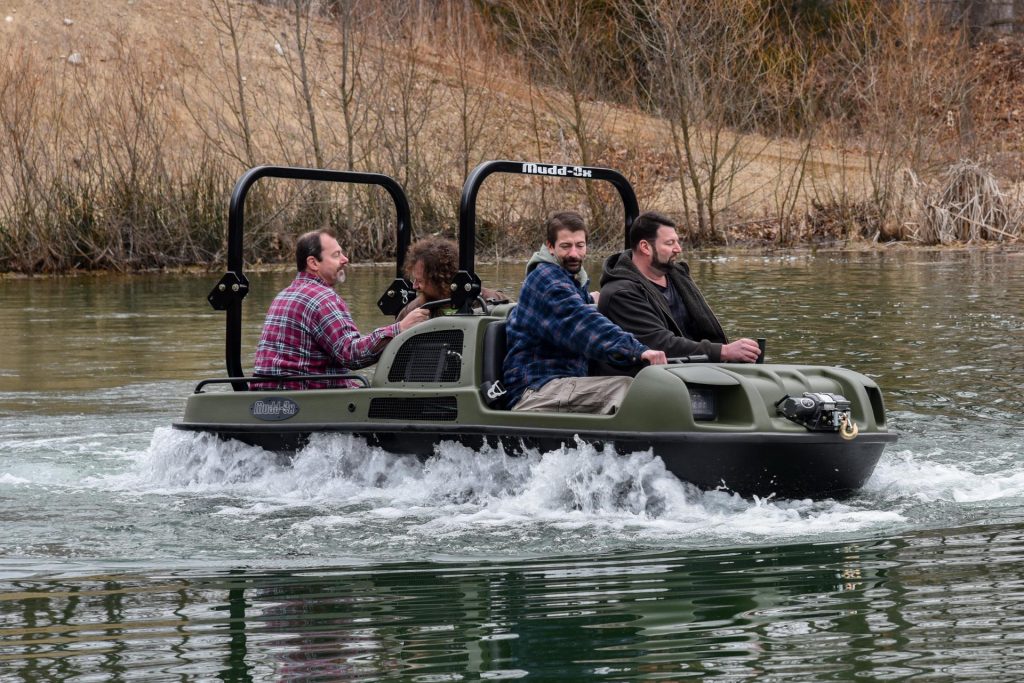 Where Are They Now

Unfortunately, many of these machines have been lost to time due to their characteristics and low production numbers. Most vehicles were purchased for farm and commercial use, experienced a hard life, and have been left to rest in the pasture. Early bodies were designed of brittle plastics and often broke apart. Some manufacturers simply did not produce more than a handful of machines. Our goal is to preserve as much of this history as possible, while it is still possible. 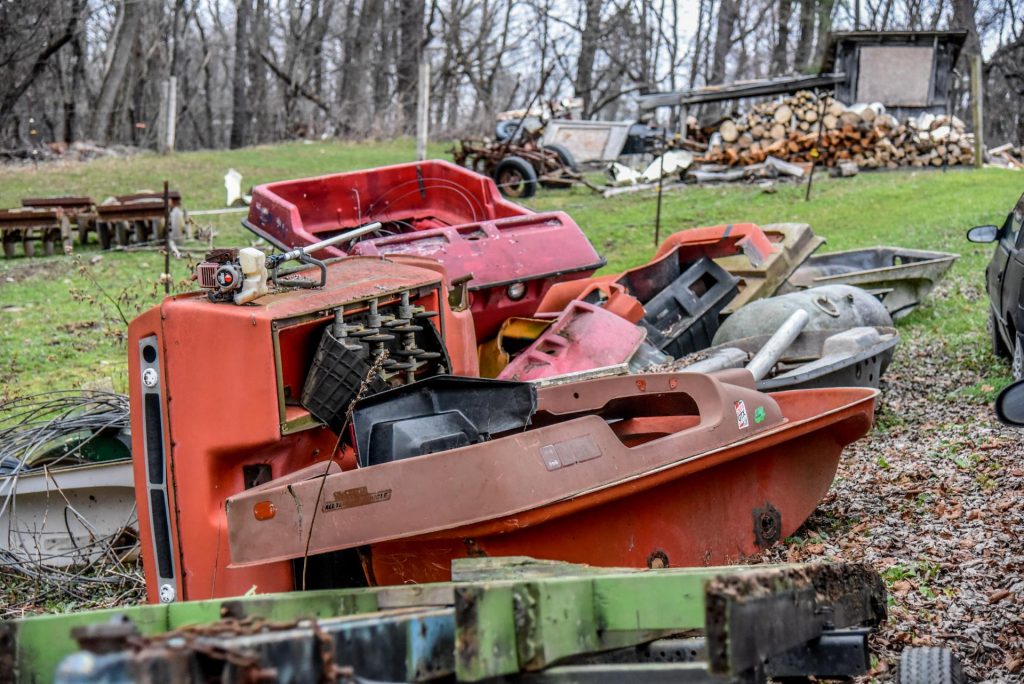 This is an extremely brief history on amphibious ATV’s. We hope it has sparked interest in our collection of vehicles and memorabilia, and the industry itself. If you have any machines, literature, memorabilia, or even stories, please see our wanted page here. 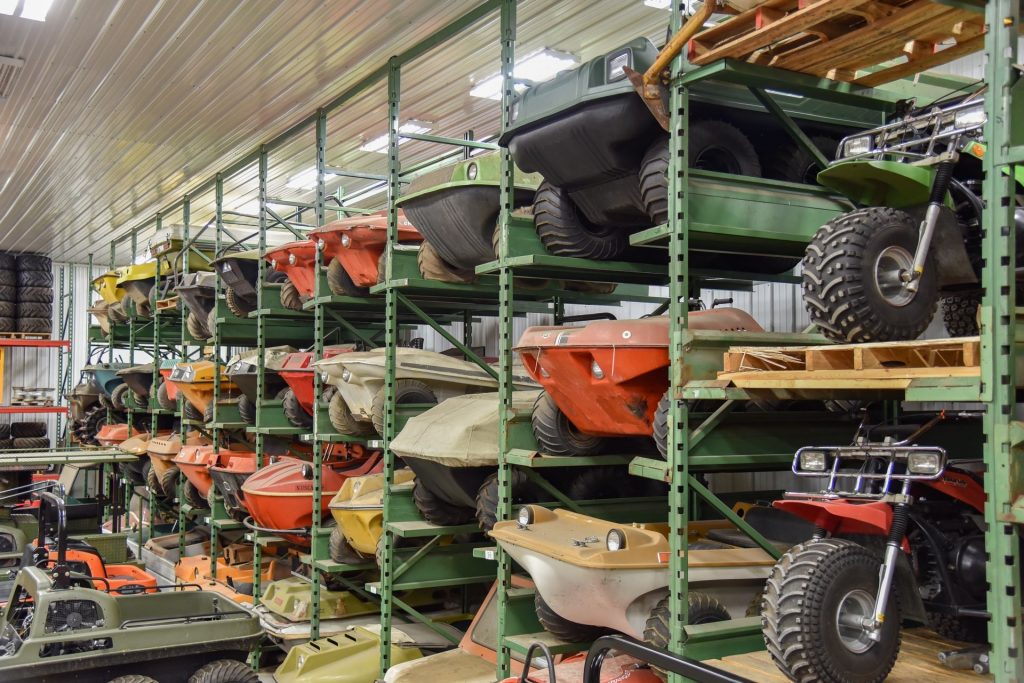